A Brief Introduction to “Complexity” 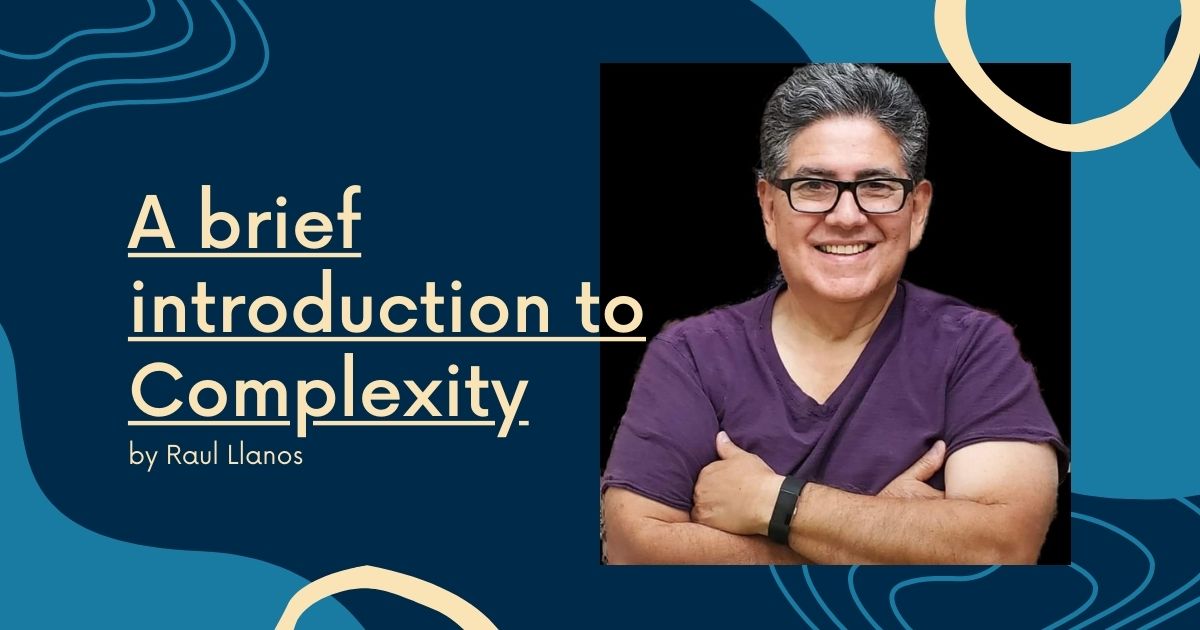 As of February 4th, 2021, Mr. Raul Llanos was the Keynote Speaker of our meeting and talked about Complexity.

His eloquence and well explained views of the science of complexity and its huge variety of models and ideas through which we can interpret and understand the world around us, captivated the audience and ended up with a very interesting debate where every one shared their points of view and their understanding as to how we should keep focus on the subject. – We should add that Mr. Llanos is the husband of our fellow member Lígia  Assunção Llanos, therefore he can be considered a very important member of the Rotarian family.

We asked him to be kind enough to send us some notes afterwards so we could share his thoughts in our blog.  So here they are:

“After Ms. Marcia Algayer’s cordial introduction and my Academics:

Observation made as to what we must keep in mind while pursuing academic efforts.

Independent of the academic course of study we choose – it must be kept in mind that a key objective of getting an education is to use these courses as a framework to:
– Learn to be resourceful ( for the answers to problems once you are out of school and in the field are not going to be found in the back of the book).
– Learn to think so as to be able to organize one’s thoughts with clarity. See the world from different perspectives.
– Use the above tools for a common sense and ethical approach to solving problems.

Comment made that it takes a good while once we are out of school ( 8-10 years) before one can consider oneself knowledgeable in the field chosen. Reference made to Malcom Gladwell and some of his books (Tipping point, Outliers). Many a time we find ourselves dedicating our lives to fields outside of our course of study, but carrying with us always the basic framework stated above.

Observation made as to my philosophy of Life.

I consider myself an Existentialist. Meaning that everyone of us as an individual is responsible for what we do, who we are , and for the manner in which we face and deal with the world. In other words it is a philosophy of No Excuses. Life may be hard with difficult circumstances, full of obstacles, with many limitations, but we are at the end responsible, and cannot shift the blame to anything or anyone. It is a way of life that encompasses the following themes:

As to the pragmatic side of my life:

Mentioned that I have been involved in the field of Technology.

The process of transforming basic knowledge into useful applications.

Science is : KNOW WHAT and Technology is : KNOW HOW.

If you combine the above with Business ( KNOW WHO) and Markets (KNOW WHERE)
Then one has a good chance of launching disruptive an innovative technologies in the market place.

Commented that a multi-disciplinary field of study and work enabled me to be more proficient in this area.

Moving on to the topic of the presentation:

New ways of understanding our situation are required – We must look for guide-posts, ideas, tools that can help make sense of the world.

We are inundated with so much information (noise) and need to make sense of it all.

Reference was made to the following process:

We must take the Information ( Noise) and Filter it as much as possible using Tools available and transform factual information into KNOWLEDGE and use this KNOWLEDGE to make wise choices – decisions.

Commented on what John Erskine ( American educator ) said: “ we have a moral obligation to be intelligent”

Yes – indeed because our actions impact not only us but those around us, our world, and therefore the wiser our choices the better this world will be.

In closing this segment of the talk, reference was made to Joseph Campbell’s (American Professor of Literature, Mythology & Comparative Religion) quote:

Life as no meaning – We bring meaning to it!

At this point the study of Complex Systems was introduced as a tool to obtain a better understanding of our complex world.

We live in complex times – Industry failures, government failures, ecological disasters, terrorism, pandemics and so forth. Every day the list gets longer which we must live with and endeavor to understand to so as to make sense of it all and attempt to tame it.

Things that are complicated are often confused with being complex: A watch (1)- computer, 747 jet…) but in fact they are not, as they do not meet the criteria definition of complex systems. Whereas – Society, family relations, economies, our world are indeed examples of complex systems.

Complexity is defined as entities that are:

A visual tool to better understand these features of complex systems is the image of an oven with its dials was summoned to mind: 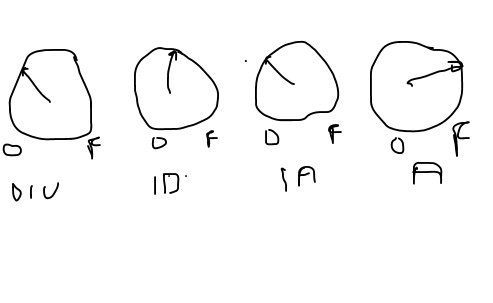 Each dial ranging on the left from 0 to F on the right .

If we turn the diversity dial to (0) it means that every entity is the same- if we turn it all the way to F it means that every entity is different – same is for interacting (connectedness) – at 0 nobody is connected – at F everyone is connected to everybody else. And the same is for interdependent and adapting. The same reasoning applies for turning to the right or F. If this is the case then everyone is diverse, connected , interdependent and adapting .

The case for the dials at 0 leads to obtaining a rock and for the F position – a Mess- Chaos. In either of these two extreme states we do not have complexity.

Complexity exists only in the IN-BETWEEN stages from 0 to F. The state between “nothing happening” and too much happening”

To make the above a bit clearer take the following:

Set the Interdependent dial at 0 – which means everyone is independent of each other. I can wear anything without concern as to what others are wearing. My decision has no impact on anyone else. If we were to take a look at, lets say sweaters for the area one lives at – the sweater wearing behavior is normal and would be responding to the weather – the colder the more people wear sweaters – hence nothing complex here.
However if we were to turn up the Interdependent dial and consider now how this impacts the behavior of wearing sweaters and imagine the scenario for Middle schoolers- They will now be thinking what sweaters to wear based on what their friends are wearing and what the people they don’t like are wearing- at this point one has inter dependencies and the potential for complexity has arisen. You now have myriad schoolers wondering what to wear.

Turn the dial even further to F and now every student is caring what every other student is wearing – every apparel- item. At this point one has drifted beyond the region of complexity and what one has now is a MESS

(Chaos) as stated above.

The above example can be replicated for each of the remaining attributes of complexity.

Reference was made that extent to which we have each of the attributes determines the degree of complexity. If we adjust the dials all the way to the left nothing happens and if we turn them to the right we get either equilibrium or a mess.

If you contemplate what we have just discussed above you will get an understanding as to why there is so much complexity in the world.

Mention was made that each attribute impacts complexity in different ways and as such we took the case of Diversity:

Briefly touched upon the notion that ramping up diversity could lead to increasing complexity or decreasing it.

We looked at Diversity as beneficial in creating better groups, firms, schools and societies.
Wisdom of the Crowds: enable collections of people to make accurate predictions.
Thinking differently : Diverse perspectives: ways of representing problems
The perspective one gives a problem will determine how easy or hard it will be.
Different interpretations of problems.

Presented:
1. Example of people living in NYC vs Arkansas and impact of diversity on perspectives.
2. Also, the case of GE – where it decided to bring in personnel with diverse fields into the organization to obtain different interpretations.
3. Case of what is going on in China. Book by Strittmatter- We are Harmonized. Normalization of society and its detrimental impact.
4. Complex systems in the context of Democracy: How the study of complexity can lead to: Policy recommendations for better governance.
5. Democracy vulnerable to Cascading Beliefs about the unfairness of the democratic process.
6. Briefly made reference to people’s tolerance thresholds and the Jan 6th riot at the Capitol
7. And segregation at the macro level even though at the micro level you have a high degree of tolerance ( neighborhood example).
8. Mentioned that building the atom bomb, curing cancer were not complex issues in themselves and as such ( categorized as Rough Landscapes) determined the application of resources to solve the problem. Instead the post atom bomb reality is complex!

A watch is not complex as even though it has diverse moving parts that are interconnected and interdependent they do not adapt meaning once you take a part out of it it will be non-functioning. As compared to your office scenario where if you miss one day of work and return the next day you will find that the office is still running as you office personnel “adapted” to your absence.

The above concepts are extracted from the readings of:

We take this opportunity to thank Mr. Llanos for sharing his experience and points of view with the members and followers of our club.  Your presence in our future meetings will always be very much appreciated!